Welcome to the World of The Fey

Their armies conquered half the world. Then came Blue Isle.

With a sweeping scope reminiscent of George R.R. Martin’s Westeros and  intricate characters like those in J.R.R. Tolkien’s Middle Earth, Kristine Kathryn Rusch’s Fey series takes fantasy in a whole new direction. When the most powerful ruling family in the world attempts to conquer a tiny, seemingly helpless island kingdom, they meet forces they never knew existed. In a fight spread over generations, this saga of hope and magic proves that the greatest power of all comes from love.

A very good, very large fantasy…nicely done and with a particularly satisfying and unexpected resolution. 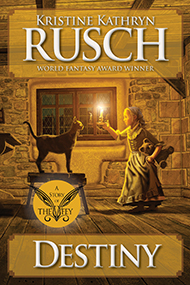 Destiny: A Prequel Story of The Fey

BEFORE THE DARK DAYS.

Written as a prequel to Kristine Kathryn Rusch’s popular Fey saga, “Destiny” follows the Shapeshifter Solanda on Nye. The Black King wants her to use her special abilities on a job that will change the Fey forever. But Solanda wants to change the life of one child. Can she do both? Or should she do nothing at all? 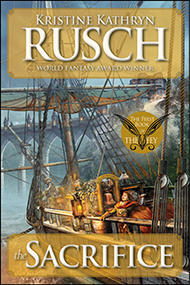 The Sacrifice: The First Book of The Fey

THEIR ARMIES HAVE CONQUERED HALF OF THE WORLD. NOW THEY WANT THE REST.

The Fey, known for their beauty and their warrior magic, have set their sights on Blue Isle. They should conquer the Isle quickly; its people, simple and religious, have never known war. On the eve of the invasion, Jewel, the granddaughter of the Fey’s all-powerful Black King, has a frightening vision, one that ties her fate to the Isle forever. Still, she helps her father Rugar head the invasion force. The force meets a surprising resistance. Nicholas, heir to Blue Isle’s throne, has always dreamed of battle. Normally, he would be no match for the powerful Fey. But Blue Isle has a secret weapon—a weapon no one understands, a weapon that could stop the Fey in their tracks. Nicholas must find a way to harness this amazing power. Jewel must find a way to thwart him. To survive, one of them must make the ultimate sacrifice. A fast-paced, vibrant novel, filled with memorable characters, Sacrifice begins a saga that will take readers to a richly imagined world, filled with magic, treachery, and unexpected love. 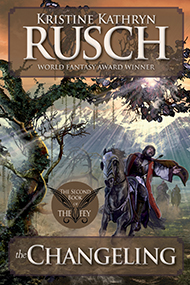 The Changeling: The Second Book of The Fey

The most surprising book of The Fey saga, with a twist so powerful the rest of the series hinges on that one moment. The Changeling alters everything from the balance of power to the very nature of power itself. For years, an uneasy truce has settled over Blue Isle. But in a series of betrayals, that truce gets shattered. First with an assassination. And then with the destruction of all hope that the warrior Fey and the people of Blue Isle will ever experience peace. Human, half-human, Fey, it becomes impossible to tell hero from villain, impossible to figure out who wants to heal Blue Isle—and who wants to destroy it. 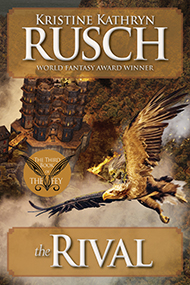 The Rival: The Third Book of The Fey

A LAND SCARRED BY WAR FACES A CONQUEROR WITHOUT MERCY.

The Fey have conquered half the world with their great skills—not just at combat and with powerful magicks. The Fey have another weapon, a greater weapon: Patience. Twenty years after their first invasion, the Fey try again to conquer Blue Isle. This time, the greatest tactician the Fey have ever known, the Black King Rugad, leads the fighting force.  He’s after not only the strategic island, but he’s also after his own great-grandchildren. The oldest of those children has just come of age. He’s first in line to inherit Blue Isle’s throne. But as Rugad appears on Blue Isle, that Isle’s King Nicholas must move beyond guerrilla war to an out-and-out fight for dominance, using a magic created in the union of Fey and Islander, a magic that no one from Rugad to Nicholas himself could ever have expected… 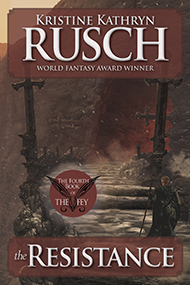 The Resistance: The Fourth Book of The Fey

A RUTHLESS WARRIOR. A BRILLIANT TACTICIAN. ONE FAMILY. OPPOSITE SIDES.

The Black King of the Fey, Rugad, has conquered Blue Isle’s capitol city. He thinks he’s conquered the Isle itself, even though he can’t find its royal family. That family has retreated to the mountains. Exhausted but undefeated, they will regroup and attack again, this time with a new weapon, one that can change everything. As both sides gear up for a second round of terrible warfare, the Shaman has a Vision filled with death, destruction-and the source of Fey might: The Place of Power. 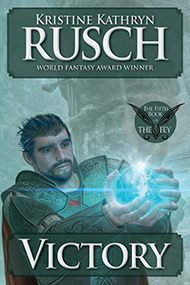 Victory: The Fifth Book of The Fey

AN ANCIENT WEAPON. A NEW SOURCE OF POWER. ONE SPLINTERED FAMILY. WILL IT DESTROY THE WORLD? OR SAVE IT?

In the Cliffs of Blood, Blue Isle’s royal family has discovered a secret so powerful that it might destroy the Black King of the Fey. But the Black King’s power comes from the same source as the powers of his great-grandchildren. And they’re trying to defeat him. If they use this ancient weapon, will they destroy themselves? Must they in order to save Blue Isle? Will using the weapon vanquish the Fey? Or give the Fey the ultimate power? A saga of magic, strange alliances, hope, and fear, filled with disaster, triumph, brutality, and enchantment. 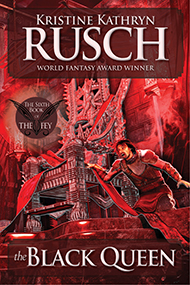 The Black Queen: The Sixth Book of The Fey

FIFTEEN YEARS OF PEACE—SHATTERED BY A SMALL VOICE

Peace marks Queen Arianna’s rule of the Fey Empire. Until a war begins inside her. A mysterious presence tries to take over her mind—one of the most magical and powerful brains in all of Blue Isle. The only person who can help her? Her brother Gift, the legitimate heir to the Fey Empire. He doesn’t know enough magic to save her, but he will find someone who can. But the Black Throne itself has other ideas. It wants Gift to rule the Fey. To do so, he must betray his family, betray his heritage, betray everything he believes in. If his sister loses control of the Fey, then the entire world will plunge into war. Will Gift allow that? Or will he step into his position as the rightful ruler of the Fey? Will he destroy the world or destroy his family? Will he let the Black Throne win?

The Black King: The Seventh Book of The Fey

FAMILY. KINGDOM. SELF. THE FATE OF THE WORLD HINGES ON MAKING THE RIGHT CHOICE.

Blood Against Blood: The name of the ancient curse that protects members of the Black Family from murdering each other. But what if circumstances justify the death? What if a family member needs to die? Gift faces this dilemma. A powerful presence has taken over his sister Arianna’s mind, and Arianna rules the Fey. If that presence takes over the Empire, the world will end. But something awful will happen if Gift harms his sister. The Black Throne itself complicates everything. Because the Throne, a living entity in its own right, wants Gift to rule, not Arianna. Does Gift do what’s best for his family? For the Fey Empire? Or for himself? And how can he know what’s best? The magic confuses, the Throne tempts, and his sister’s mind seems gone. Gift must make the right choice or doom everyone—and everything.